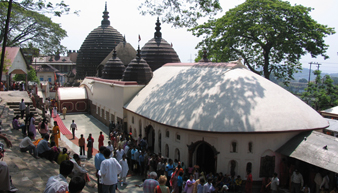 The Kamakhya Temple in Assam is one of the most venerated Shakti shrines in India, and is regarded as one of the Shakti Peethams associated with the legend of Shiva and Daksha Yagna.Kamakhya is located on a hill - Neelachala Parvat or Kamagiri near the city of Guwahati in Assam. Shakti, residing on the Kamagiri hill is known as Kamakhya, the granter of desires. Assam traditionally has been known as the Kamarupa Desa and has been associated with Tantric practices and Shakti worship.

This temple was destroyed in early 16th century, and then rebuilt in the 17th century by King Nara Narayana, of Cooch Bihar. Images of the builder and related inscriptions are seen in the temple. The Kalika Purana, an ancient work in Sanskrit describes Kamakhya as the yielder of all desires, the young bride of Shiva, and the giver of salvation.

Legend has it that following the destruction of Daksha's sacrifice and the Rudra Tandava of Shiva parts of Sati's body fell at several places throughout India, and these places are revered as Shakti peethas. The reproductive organ of Sati, (the Yoni) is said to have fallen here.

Legend also has it that the supreme creative power of Bhrahma was challenged by Shakti, the mother Goddess, and that Bhrahma could thereafter create, only with the blessings of the Yoni, as the sole creative principle. After much penance, Bhrahma brought down a luminous body of light from space and placed it within the Yoni circle, which was created by the Goddess and placed at Kamarupa.

The temple has a beehive like shikhara. Some of the sculptured panels seen here are of interest. There are images of Ganesha, Chamundeswari, dancing fitures etc.

There is no image of Shakti here. Within a corner of a cave in the temple, there is a sculptored image of the Yoni of the Goddess, which is the object of reverence. A natural spring keeps the stone moist. 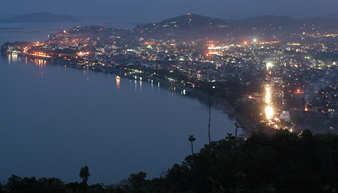 Situated on the bank of the mighty river Brahmaputra, Guwahati - said to be the legendary Pragjyotishpur or City of Eastern Light - is the gateway to north eastern India. The name is a combination of two words: Guwa meaning areca nut and Hat meaning market. Guwahati is the commercial nerve centre of the North-East. The places to visit Kamakhya Temple, Basistha Temple, Balaji Temple, Sukreswar Temple, Rudreswar Temple, Umananda Temple, Ugratara Temple, Shankardev Kalashetra, Accoland, Jyotichitrobon, etc. and shop for handicrafts and handloom items include the State Government's department store, Pragjyotika at Ambari as well as several private shops in Pan Bazar and Fancy Bazar, two of the main commercial markets. 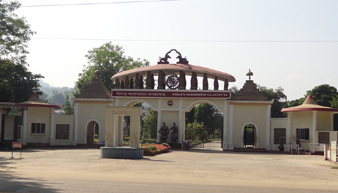 Srimanta Sankaradev Kalakshetra commonly Kalakshetra is a cultural institution in the Panjabari area of Guwahati, Assam, named after the medieval poet-playwright and reformer Srimanta Sankardev.[2] It includes a cultural museum, library and various facilities for preserving, demonstrating and performing cultural items, besides a children's park. In addition to being Northeast India's largest cultural congregation, the Kalakshetra is also a major tourist spot in Guwahati. Built in the 1990s, the artistic excellence of Assam and rest of the north-eastern region is displayed here. There are eateries, places of worship, emporiums and open air theatres within the sprawling Kalakshetra premises.

It is governed by a body of executives, selected by the Assam Government's Cultural Department and is headed by a Director of the Assam Civil Service or Indian Administrative Service cadre. The Kalakshetra is divided into several complexes. The Central Museum exhibits the articles used by different ethnic groups of Assam. The museum also houses several cultural objects of the state within it. The open-air theater can accommodate 2000 people and hosts cultural programs in its premises. Traditional dance and drama performances are conducted in this theater. The Kalakshetra also has the Artists' Village, which replicates the village society of Assam. The Sahitya Bhavan is the library in the Kalakshetra, which has a huge collection of rare books and manuscripts. It is a repository of the literature of the region. Another section of the art complex is the Lalit-Kala Bhavan. It is the center used for exhibitions and workshops on art and culture. A heritage park is also a part of the huge complex of the Shankardev Kalakshetra. Now a cable car facility is also available inside the park to commute the tourists. Nice view of the hills of Shillong plateau can be seen from the fields of Kalakshetra. The museum provides you a summary of Assamese Culture. The Bhupen Hazarika museum is the another attraction of Kalakshetra.[3]A sculpture at Srimanata Sankardev Kalakhetra

The Kalakshetra houses number of structures and buildings abiding with the ethnic Assamese designs. A replica of the Rang Ghar (an Ahom Amphitheatre in Sivasagar district of Assam), is positioned in the entrance corridor to the main Central Museum. The Central Museum preserves some of the traditional articles, or artifacts of Assamese culture. The open air Theatre, with a breath taking view of misty mountainous range of the Khasi Hills in eyes vicinity, is a regular venue for a wide variety of cultural events and 2000 audience can enjoy the shows from the gallery seats. What can be termed as the major attraction in the Kalakshetra is an Artistic Village. This village portrays the village life of Assam in the most liveliest of form through life like statues and model thatched huts. The majority of urban children, who are now deprived of experiencing a village life due to massive urbanization, can increase their knowledge of their roots through a virtual tour of the village. The Sahitya Bhawan is an archive of Assamese texts and literatures and provides a good reference for any scholar gathering information on Assam or the related North Eastern states. The Lalit Kala Bhawan offers a world class exhibition space for arts and sculptures.A walk through the Heritage Park gives a feeling of contentment and satisfaction to any nature's child. The Kalakshetra quite often holds various workshops of dramaturgy, cinema and other performing as well as visual arts. Beside these a candid eye for beauty can always spot the various murals on the center's surrounding walls. These murals depict various war moments, Bihu dances and other Assamese iconic representations. 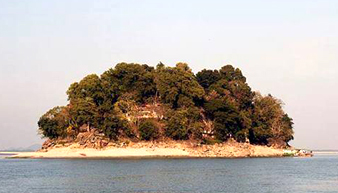 Umananda Devaloi is a Shiva temple located at the Peacock Island in the middle of river Brahmaputra just opposite the office of the Deputy Commissioner of Kamrup or the Kachari Ghat in Guwahati. It was built by the Ahom King Gadadhar Singha (1681–1696), who was a devout Shaivaite.

It is known as smallest inhabited riverine island in the world. Country boats that are available on the bank of Brahmaputra take the visitors to the island. The mountain on which the temple has been built is known as Bhasmacala. 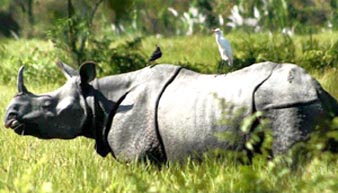 Whether the tourists visiting is a first timer or the frequent visitor, Kaziranga can never fail to get under their skin. The presence of the Great Indian One-Horned Rhinoceros, upon which this sanctuary is formed is one good and the main reason to visit the park. With its elephant grass, marshland, and dense tropical moist broadleaf forests sprinkled in the park, Kaziranga has no rivals when it comes to the wildlife vacation.

Observing the wildlife, including birding, is the main visitor activity in and around the park. Guided tours by elephant or Jeep are available. Hiking is prohibited in the park to avoid potential human-animal conflicts. Observation towers are situated at Sohola, Mihimukh, Kathpara, Foliamari, and Harmoti for wildlife viewing. The Lower Himalayan peaks frame the park's landscape of trees and grass interspersed with numerous ponds. An interpretation centre is being set up at the Bagori range of Kaziranga, to help visitors learn more about the park. 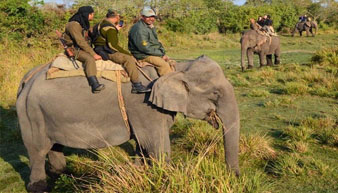 Manas National Park is a UNESCO Natural World Heritage site, a Project Tiger Reserve, an Elephant Reserve and a Biosphere Reserve in Assam. The only tiger reserve in Assam and also famous for the rare golden langur and the red panda, Manas is one of the best-kept national parks in India.

Manas is recognized not only for its rich biodiversity but also for its spectacular scenery and natural landscape which includes a range of forested hills, alluvial grasslands and tropical evergreen forests. It's home to India's second-largest tiger population. It is also famous for its population of the Wild water buffalo.

Manas harbours the maximum number of endangered species from India as listed in the IUCN Red Book. One can easily spot rhinos and tigers while sitting on an elephant. Forest officials arrange rides on elephants from Mathanguri for visitors to Manas. You can see tea pickers going about their job in groups during the tea season. Best time to see activity is October till first week of December and again from mid March onwards. 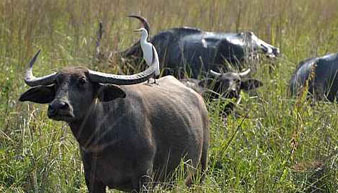 Pobitora Wildlife Sanctuary is nestled in the grasslands of Assam which is the dwelling place of the Greater Indian One-Horned Rhinoceroses with its highest population in the whole world. It is landlocked by Assamese villages from every side of it with the traditional Assamese culture. Overall, the terrain of Pobitora Wildlife Sanctuary is a breathtaking experience for a traveler or an admirer of nature.

Pobitora Wildlife Sanctuary, situated in the flood plains of River Brahmaputra in the district of Morigaon and about 45 kms from Guwahati, the capital of Assam, India. 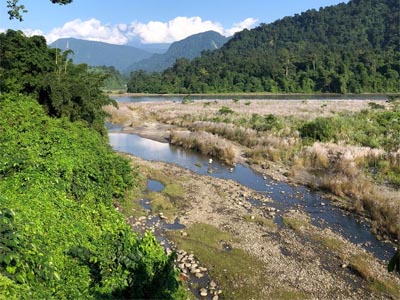 Bhalukpong is a small town located along the southern reaches of the Himalayas in Northern border of Sonitpur District Assam and West Kameng district of Arunachal Pradesh in India. The town is located at 213m above sea level, 242 km from Guwahati City and 52 km from Tezpur and 5 km from Tipi. It lies along the Karneng river and is the headquarters of Bhalukpong circle.